Skip to main content
This is documentation for Detekt 1.21.0, which is no longer actively maintained.
For up-to-date documentation, see the latest version (1.22.0).
Version: 1.21.0

See the default-detekt-config.yml file for all defined configuration options and their default values.

Note: When using a custom config file, the default values are ignored unless you also set the --build-upon-default-config flag.

detekt allows easily to just pick the rules you want and configure them the way you like. For example if you want to allow up to 20 functions inside a Kotlin file instead of the default threshold, write:

To read about all supported rule sets and rules, use the side navigation Rule Sets.

Fine grained path filters can be defined for each rule or rule set through globbing patterns. This gives the user more freedom in analyzing only specific files and rule authors the ability to write library only rules.

In case you want to apply the same filters for different rules, you can use YAML anchors and aliases to reapply previously defined paths.

Detekt supports the option to fail your build if a threshold of code smell issues is met.

For this the following code must be inside the detekt config:

Every rule and rule set can be attached with an integer value which is the weight of the finding. For example: If you have 5 findings of the category complexity, then your failThreshold of 10 is reached as 5 x 2 = 10.

Weights are respected in the following priority order:

Uncomment the reports you don't care about.

ComplexityReport contains metrics concerning the analyzed code. For instance the source lines of code and the McCabe complexity are calculated.

NotificationReport contains notifications reported by the detekt analyzer similar to push notifications. It's simply a way of alerting users to information that they have opted-in to.

FindingsReport contains all rule violations in a list format grouped by ruleset.

Uncomment the reports you don't care about. The detailed description can be found in reporting. 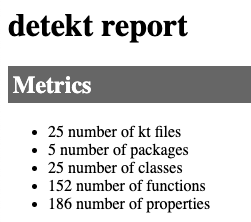 The 'DetektProgressListener' processor shows a progress indicator in stdout while a detekt process is running.

Uncomment the processors you don't care about.

A JSON Schema for the config file is available on: json.schemastore.org/detekt.

You can configure your IDE (e.g. IntelliJ or Android Studio have built-in support) to use that schema to give you autocompletion capabilities on your config file. More details on the IntelliJ support are available on this page.

The JSON Schema is currently not automatically generated. It can be updated manually on this repository.