Today we are announcing the 1.0 release of detekt, a static code analysis tool for Kotlin. It operates on the abstract syntax tree provided by the Kotlin compiler and finds common programming flaws like unused or too complex constructs. Think of it as pmd or checkstyle but for Kotlin.

Here are some metrics describing detekt's lifespan so far:

detekt is almost 3 years old already!
As GitHub tells us the project is pretty active.
You may argue that in 2018 it was more active looking at the number of commits, however that year we also changed our merge strategy from merge-with-rebase to squash-and-merge. That said, it is much harder to achieve these high commit numbers now ;).

There are 2516 commits, 52 releases on GitHub and a total 93 contributors at the time of writing. 20 out of the 93 authors contributed once or more in the last three months.

~780k downloads in the last 30 days is a pretty high number... three months ago it was around 500k. Weekends clearly stand out. That's when the CI has to rest ;).

This does however not mean one download equals one user. There are like eight detekt modules each with a jar and pom which needs to be downloaded. As most of the downloads are bound to be CI, it is hard to calculate the actual number of detekt users.

What I also noticed is the high number of "early adopters" in the Kotlin world (or just detekt).

65% of users are on a version published in 2019. But we clearly lost some users in the older versions due to breaking changes in RC13 and RC15. We are excited to see how many users will jump on the 1.x.x release train and how these numbers will look like.

Last but not least here is a worldmap of where detekt users are coming from. 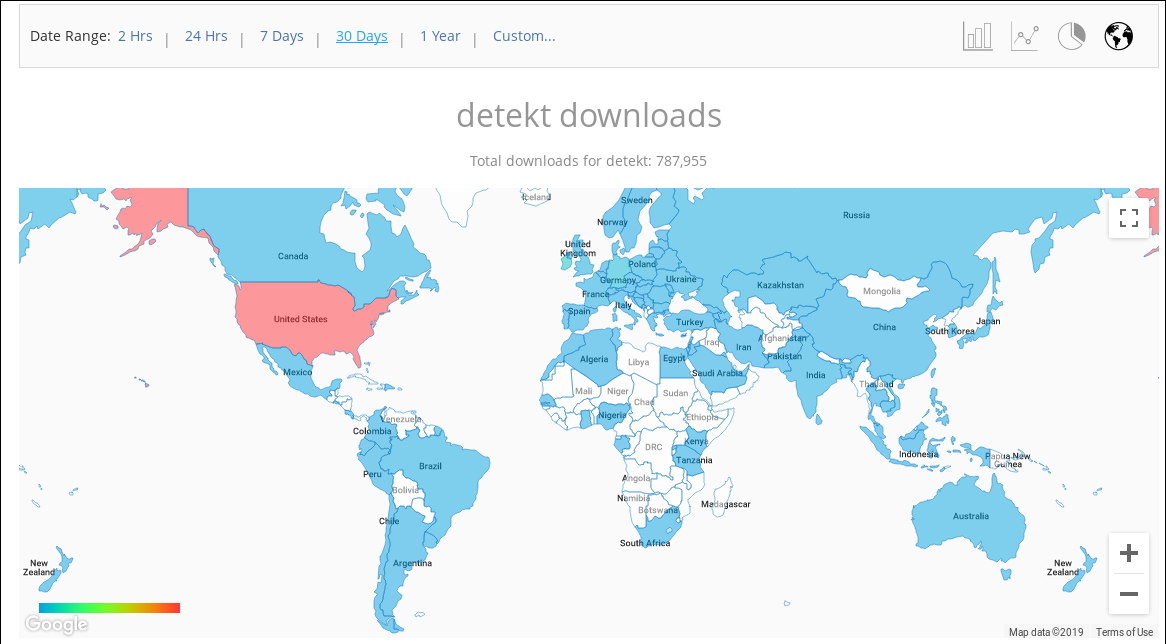